Which public transportation do you use usually when sightseeing in Tokyo?

Many would say “subway” since it can take you almost anywhere in Tokyo, including the major sights.

Though it’s very efficient, I’ll give you another option – SKY HOP BUS, the tourist bus with distinctive red body. 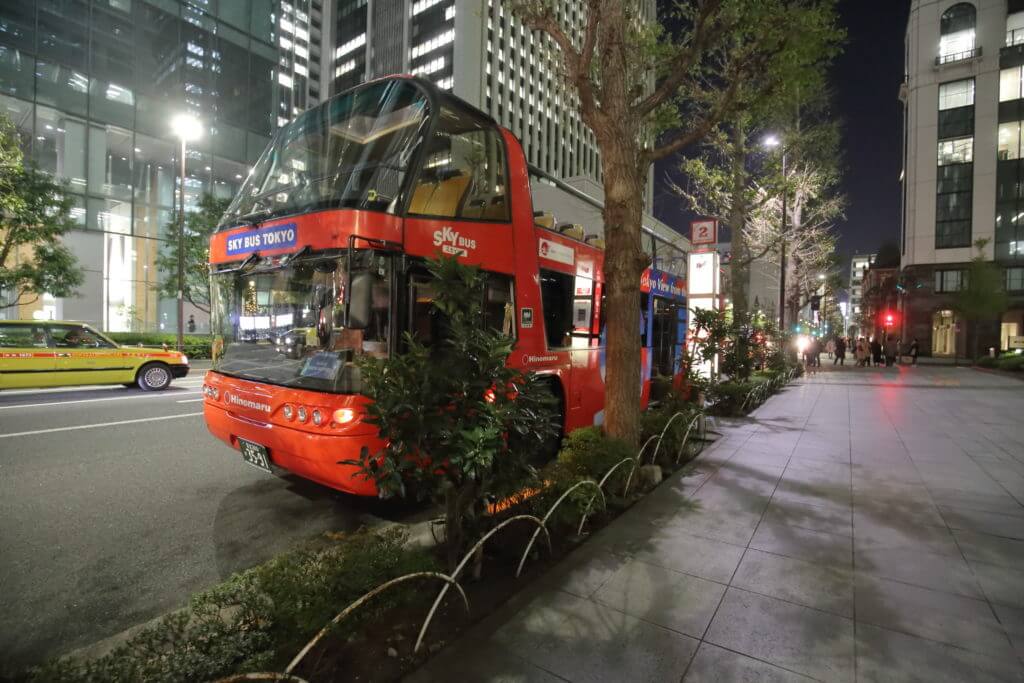 Daytime sightseeing is also nice, but this time we took bus in the evening to see night views and illuminations.

This time we chose “Roppongi, Odaiba Course” in which we can see elegant scenery of the city and night view spreading along with the Tokyo Bay.

Walking toward the bus stop, we found a red bodied with a strong presence.

Yes, this is the SKY HOP BUS. Even if there was no bus arrived yet, you would easily find the ticket counter in the Mitsubishi Building. 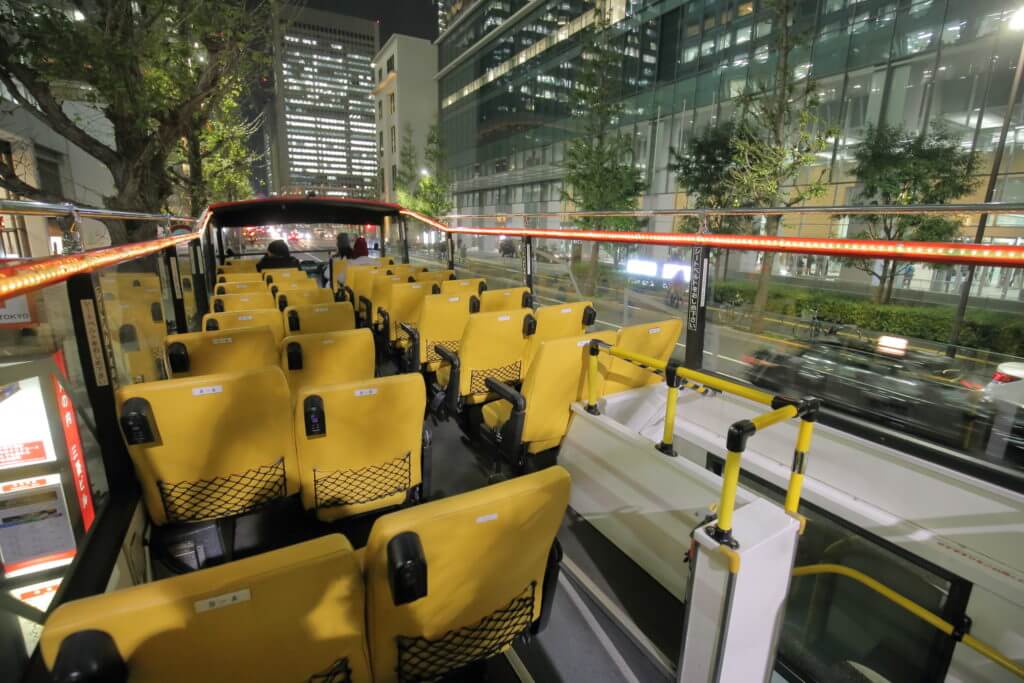 Now let’s get on! Tickets are available on the bus as well.

Surprisingly, it doesn’t have a roof!

That is the point of this bus which you will never experience on trains.

And you can choose a seat since they are all unreserved. 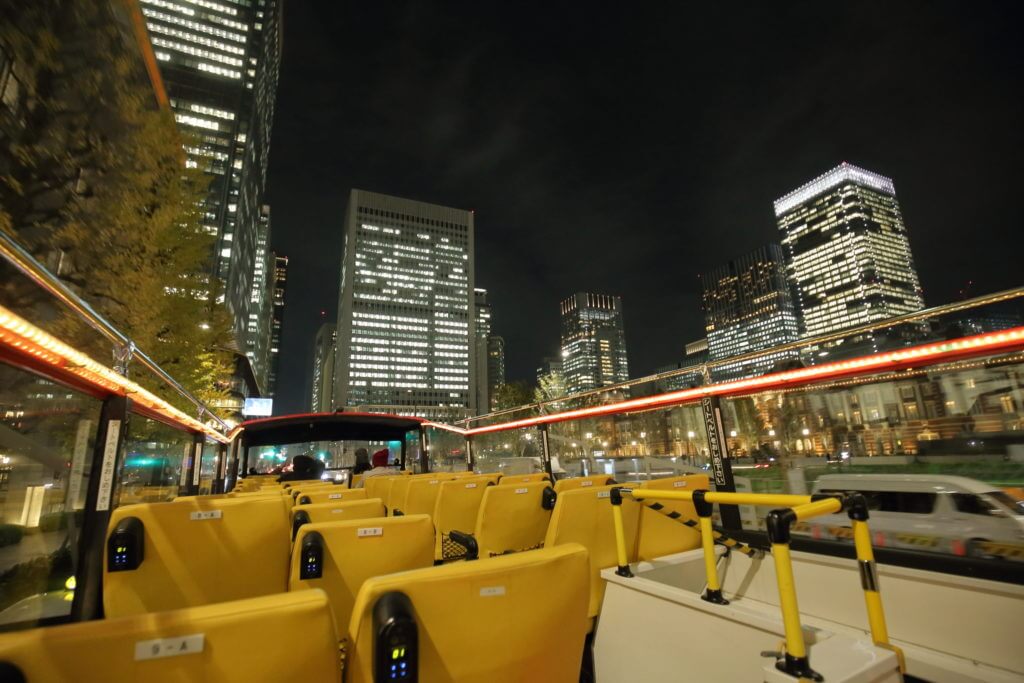 The bus departed on time. First of all, the Tokyo Station Marunouchi Building appeared on the right.

The brick-made building has been loved long as the symbol of Tokyo.

Unexpectedly, it matches modern buildings standing around the station. 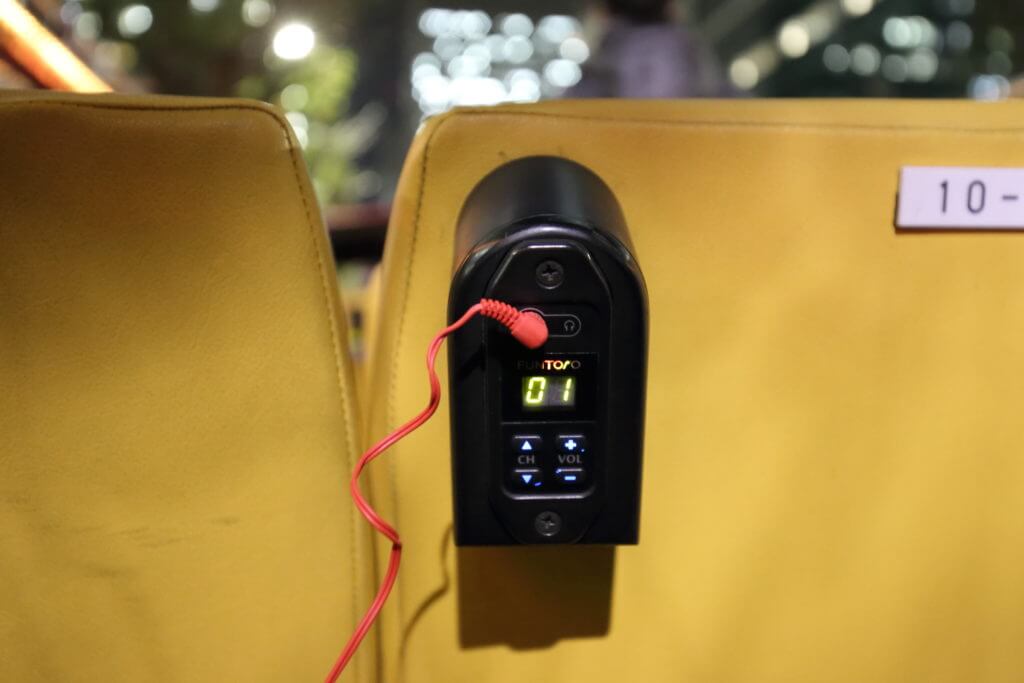 An audio guide is available on the bus in 4 languages:
Japanese, English, Chinese and Korean. 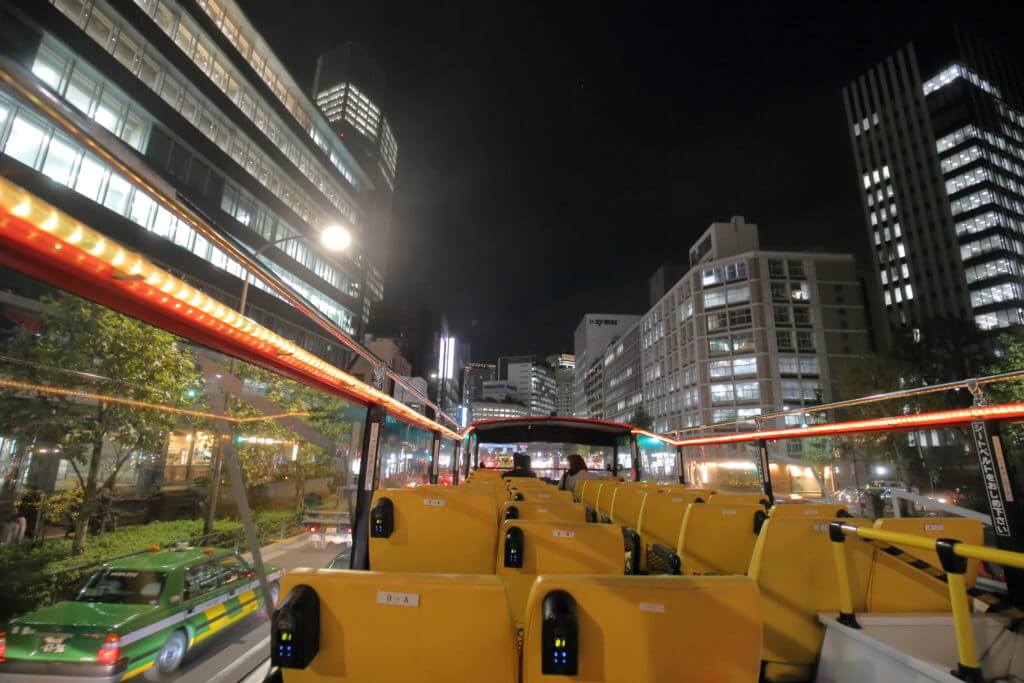 The bus moved along a street passing by tall buildings. 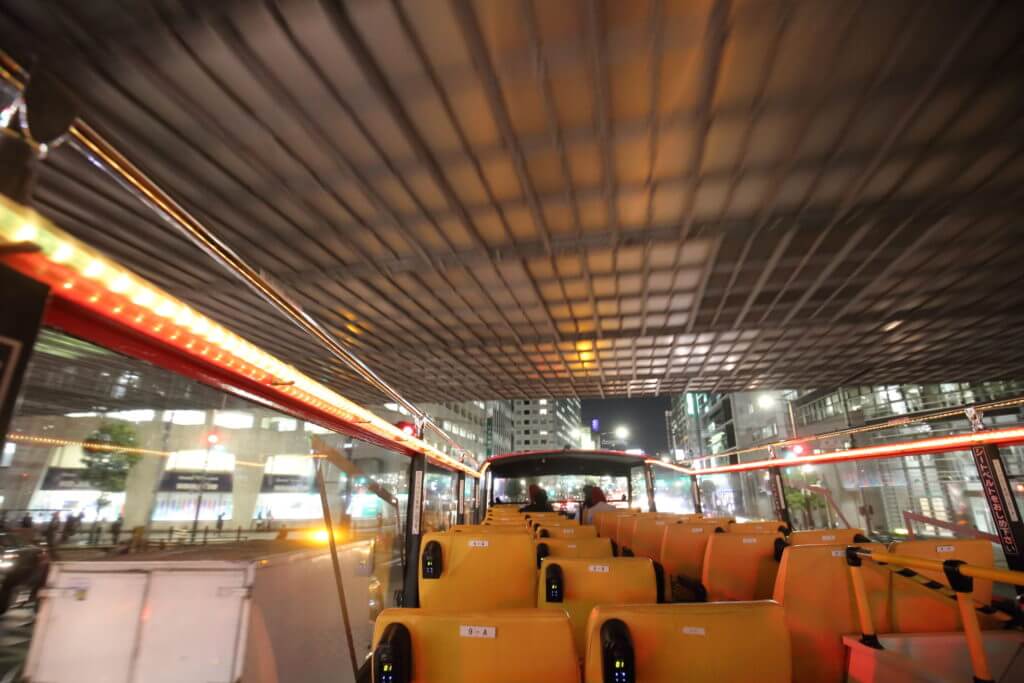 And It was very thrilling when passing through the underpass of the highway!

Having a roof or not makes a big difference.

It will make you feel like if you are on a roller coaster! 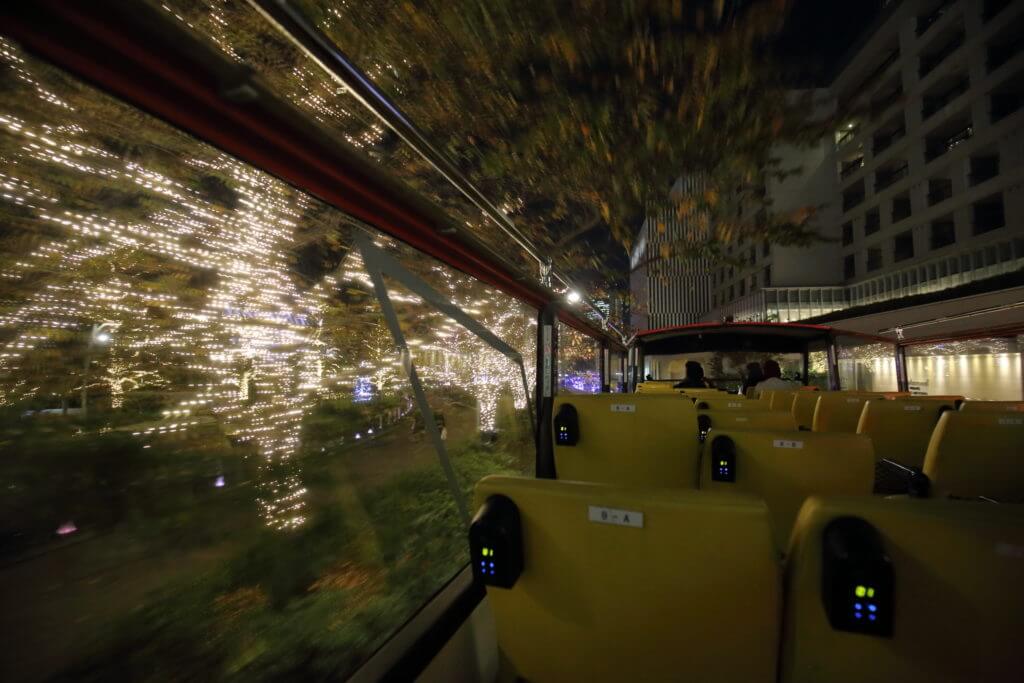 As moving along the Gaien-Higashi Street to Tokyo Midtown, a splendid illumination arrived. 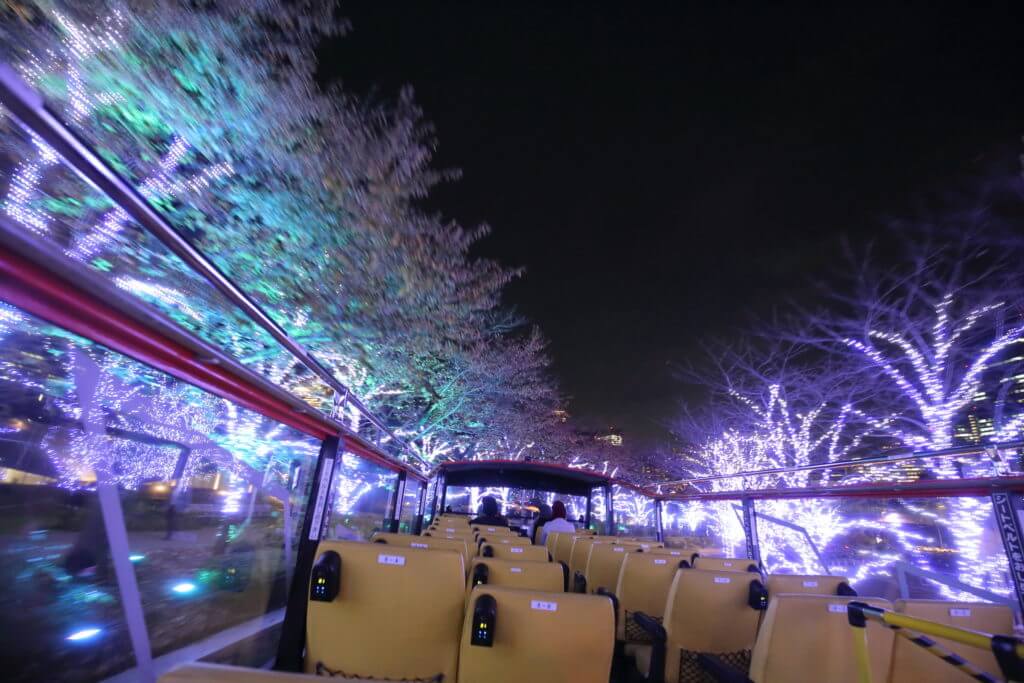 The shimmering light surrounded the bus as we moved forward.

Since it doesn’t have a roof, you can see the illumination so close that it seems like you can reach the light! 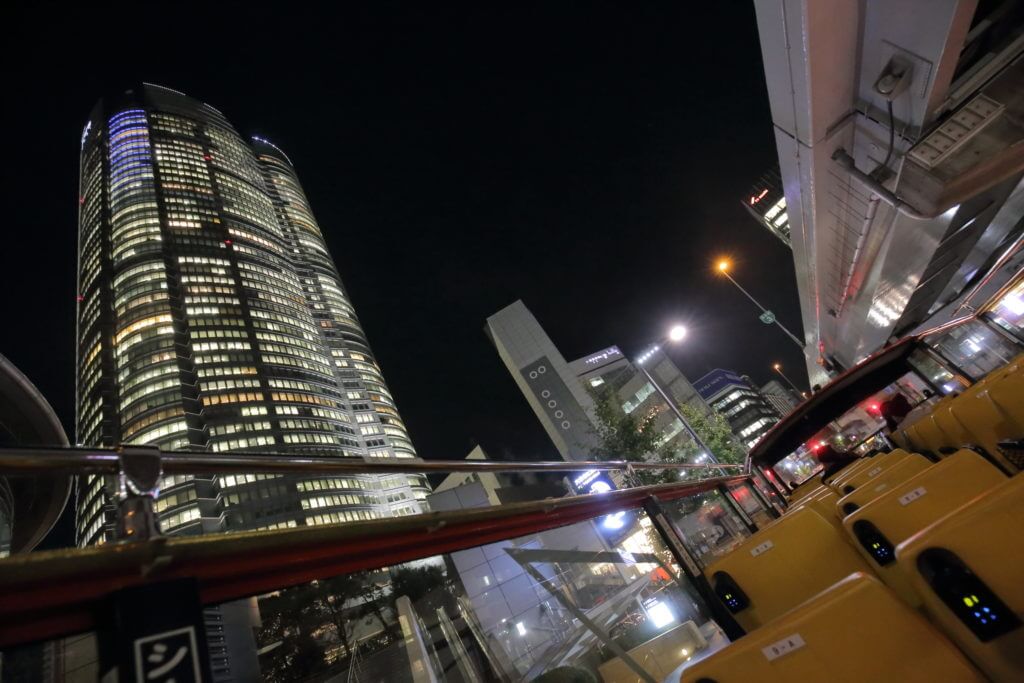 Roppongi Hills had come into our sight. Very impressive with cool, powerful appearance! 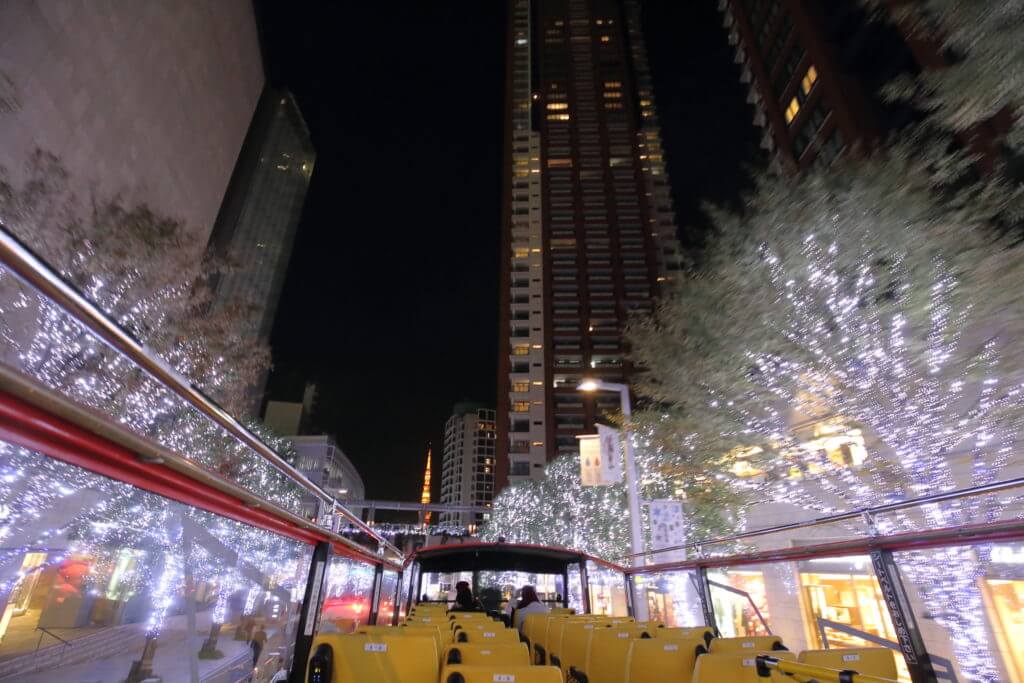 Passing through the Roppongi Hills bus stop, we arrived at another major illumination spot, Keyakizaka Street.

Here you can enjoy 2 different light patterns, blue and red, switched depending on the time.

As moving forward, the symbolic Tokyo Tower arrived in front of us. 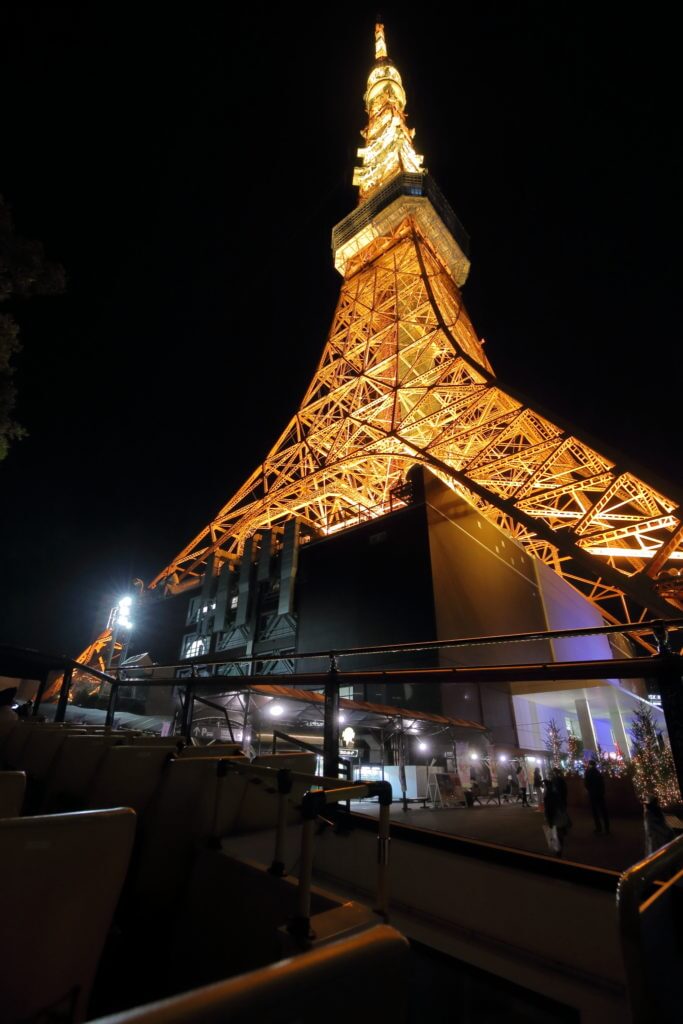 We came beneath the Tokyo Tower. Looks even taller when looking up from the bottom.

It still has a strong presence even though a lot of new buildings, such as the Sky Tree, have been built during this century.

The opportunity of looking up at the tower is offered only by the SKY HOP BUS which doesn’t have a roof.

The yearly illumination at the entrance of the tower is also a must-see. 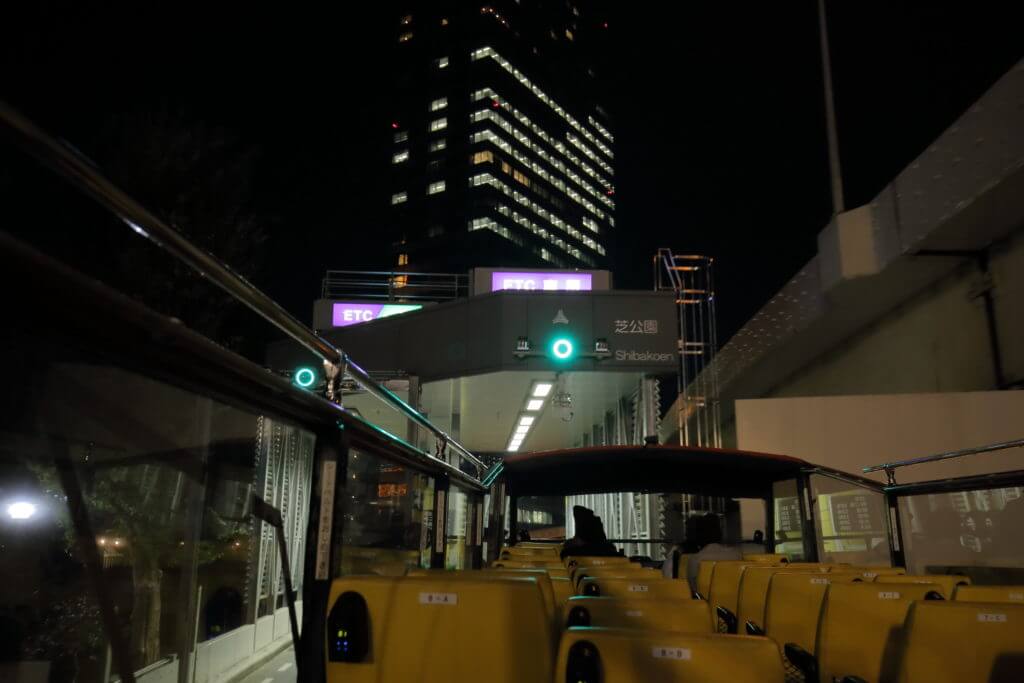 After leaving the Tokyo Tower, the bus moved on to the highway.

It’s thrilling when passing through the tollgate since it gets very close as you can almost touch the gate. 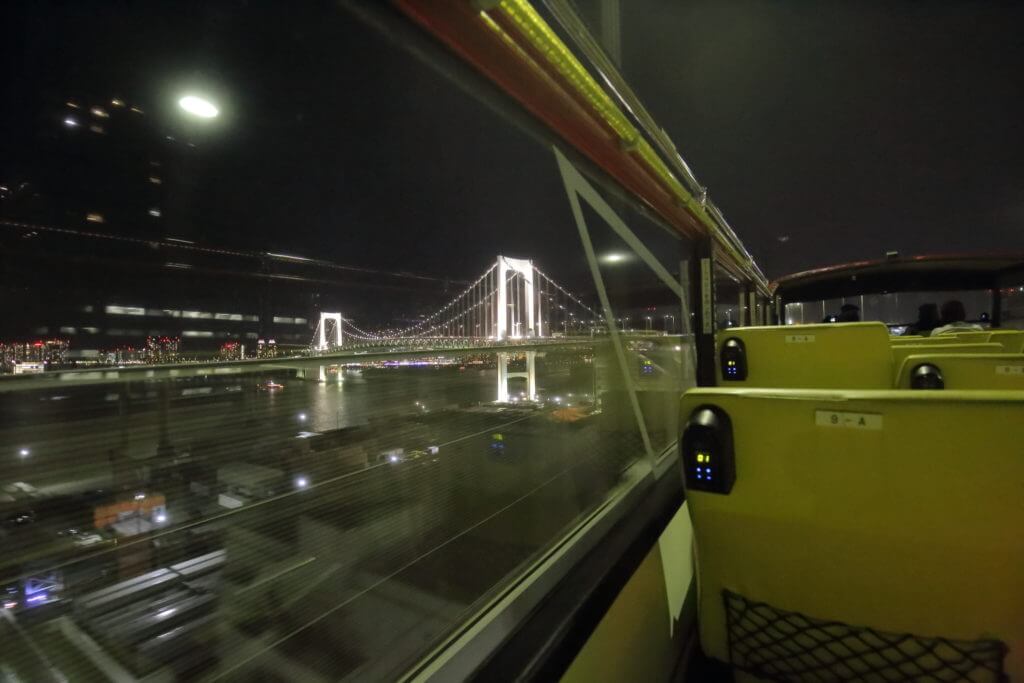 As the bus speeded up on the highway, the wind blew harder. But it was quite refreshing!

Be careful with your hat or cap if you wear it, and other things that can be blown away. 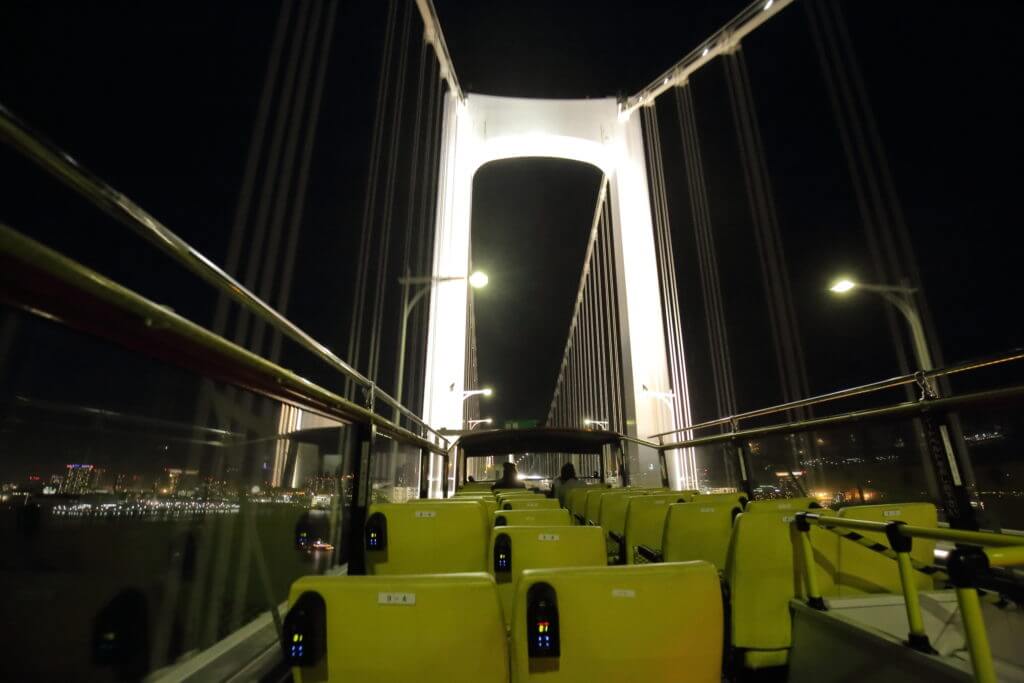 And we crossed the Rainbow Bridge to get to Odaiba.

Since there is nothing to block your sight, it is a perfect shooting point for night view.

The bus moves fast, so don’t miss the timing of taking photo. 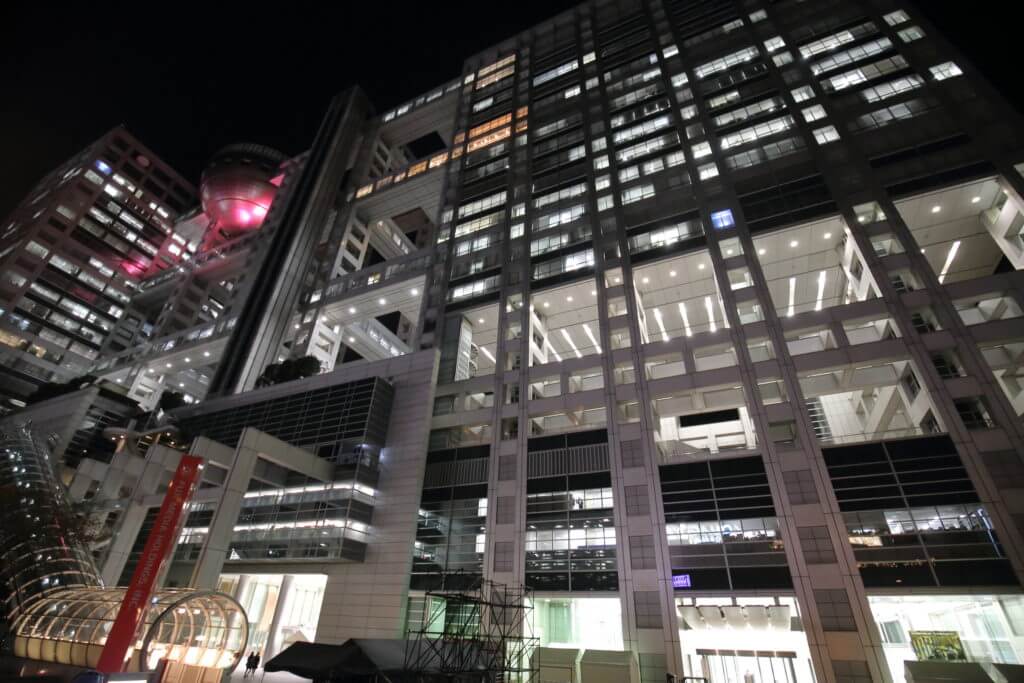 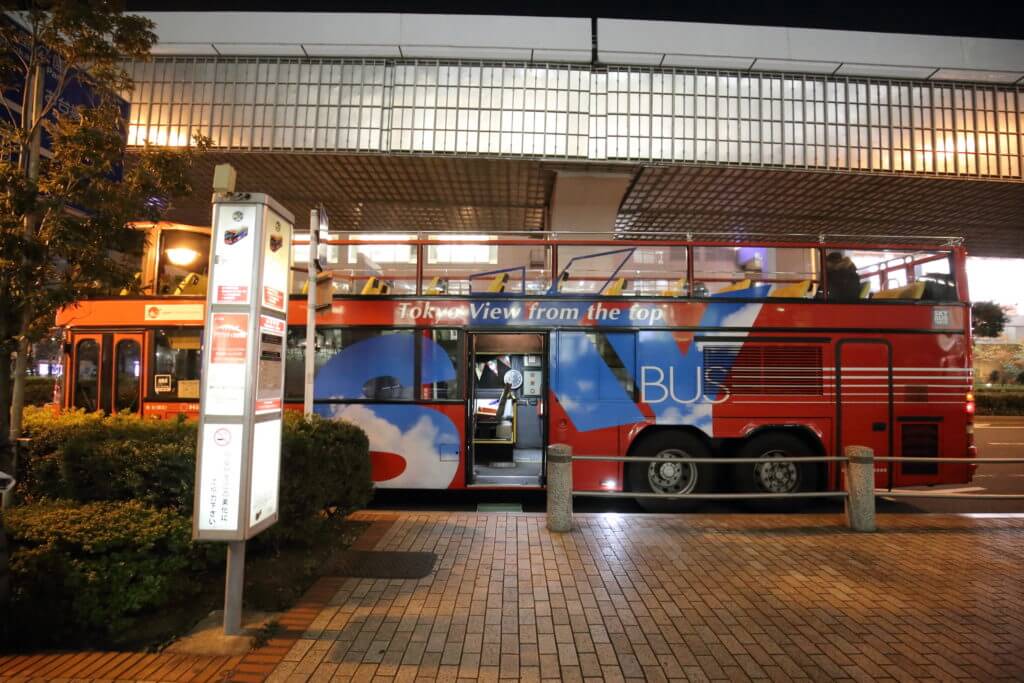 We had arrived to Odaiba where you can find a lot of view points.

To go around Odaiba, we got off the bus in front of the Fuji TV Building.

The building is one of the must-sees which has an unique appearance with a sphere on the top. 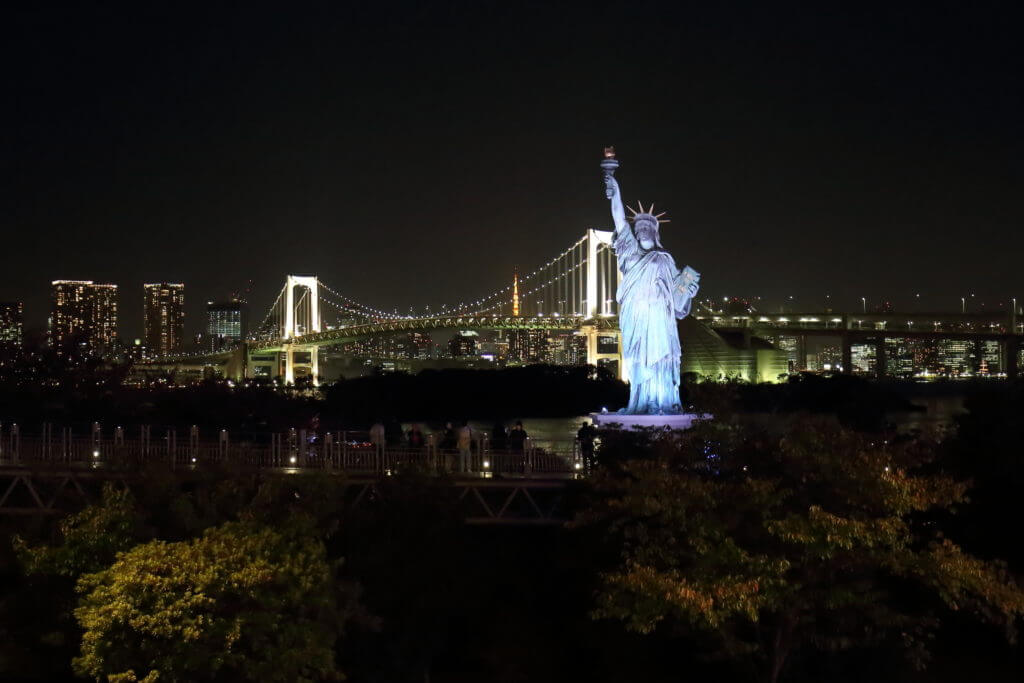 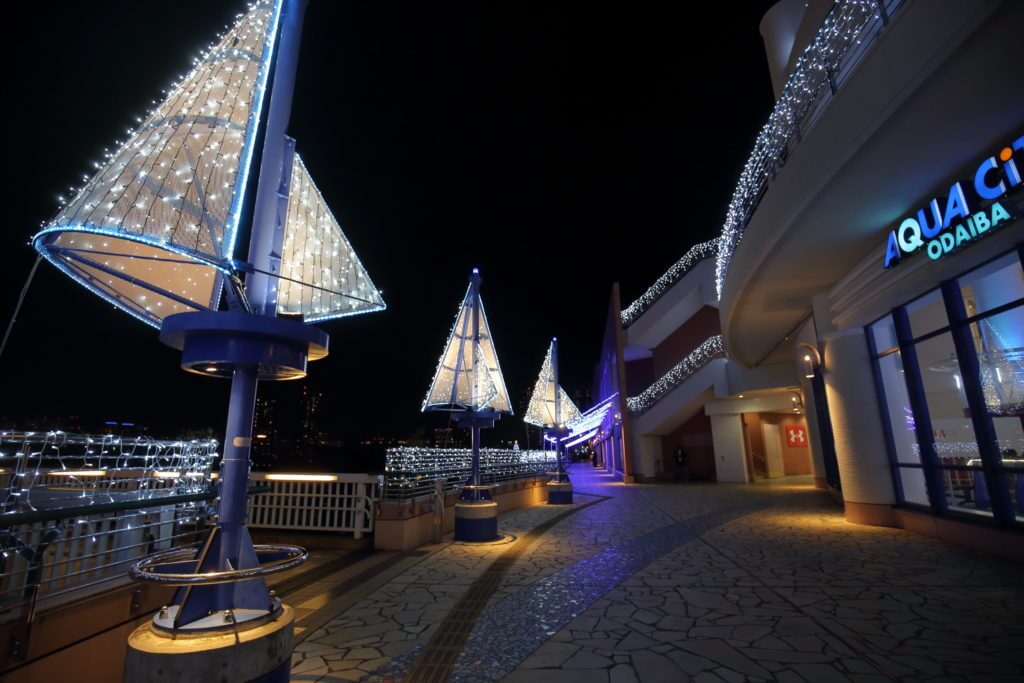 The one thing you must do in Odaiba is to watch night view spreading along the Tokyo Bay.

As moving toward Aqua City Odaiba, you can see the wide view with the Rainbow Bridge and the Odaiba Statue of Liberty.

This is the popular view point in Odaiba. 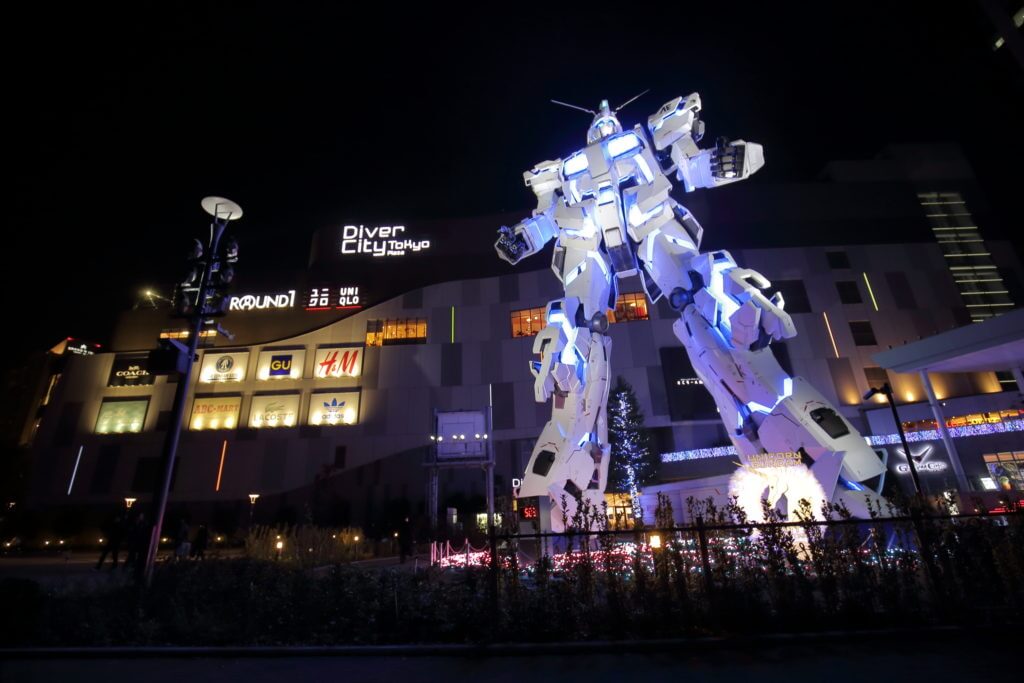 Next we visited the Diver City Tokyo Plaza. There was a crowd of people in the open air.

Their purpose was the life sized “Unicorn Gundam” statue.

We were overwhelmed by the scale of the statue.

When we visited, a limited period night event had been held, and it seemed that not only Gundam fans but also other tourists who happened to be there enjoyed the powerful view. 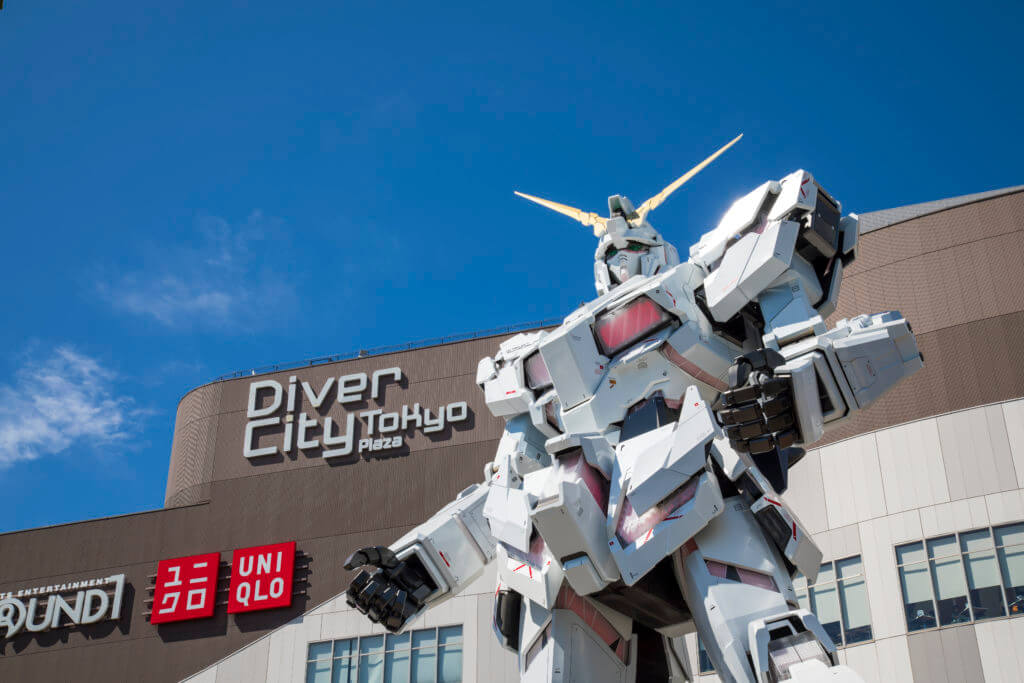 How the statue looks in the daytime

I’ve introduced the trip with the SKY HOP BUS so far. What did you think about it?

Traveling around sights in Tokyo smoothly with the open luxury bus sounds quite exciting, doesn’t it?

We chose a night trip this time, but a daytime trip is also recommended, of course!

If you’re going to have a ride in the night, don’t forget to wear warm cloth since cold headwind would blow especially in winter.

The ticket is valid for 24 hours after purchase, so you can get on and off at any stop convenient and look around your favorite spots.

Next time you visit Tokyo, why don’t you look around Tokyo’s sights with the SKY HOP BUS being blown by wind? 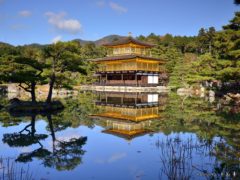 Deprived of the golden glow − Kinkaku-ji 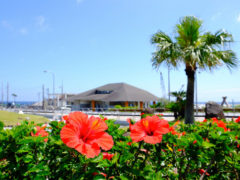 A small trip over the weekend. Make a day trip to the islands of Tokyo!
Matsumoto Castle – splendid collaboration between castle and cherry blossoms 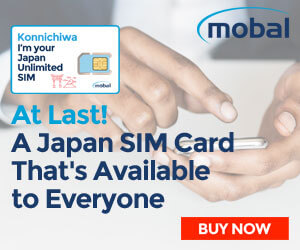 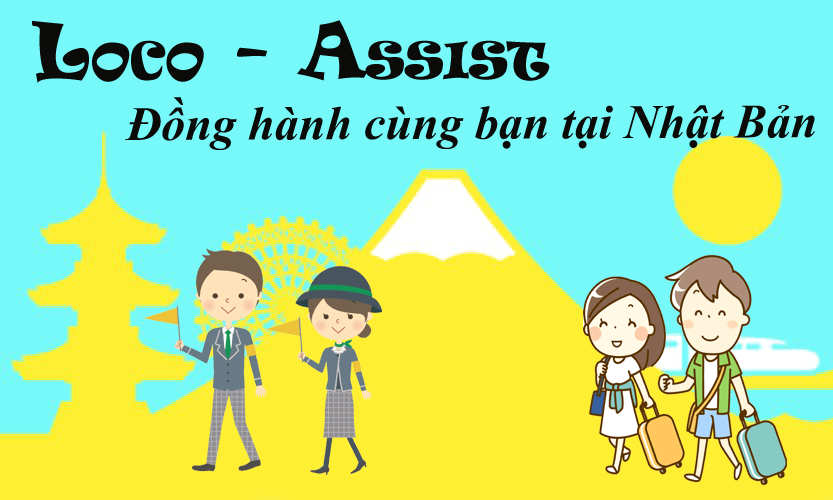 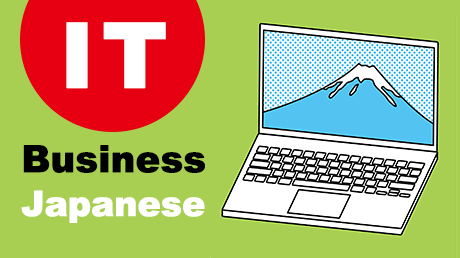 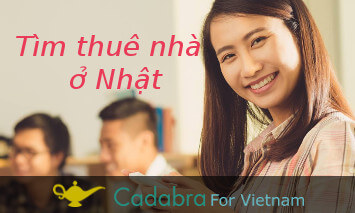 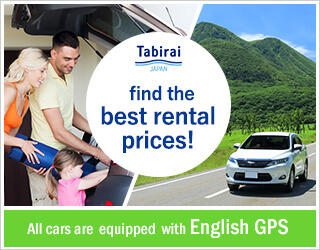 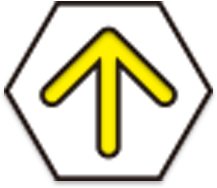